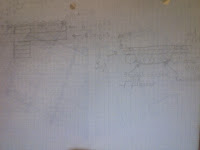 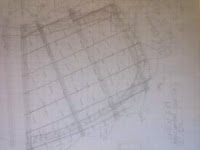 These were taken with my computer. Not the best pics. When I get a camera cable I will update them.

*12' wall height in the center, 8' on east and west.
*8" vigas spaced 9.5', 6.75' and 6.75' (north) and 2.5', 6.75' and6. 75' (south).
*6" vigas spaced 3' OC running vertically.
*1x4 or 2x4 horizontal purlins 2' OC
*Corrugated exposed fastener steel panels, probably 29 gauge galvanized/galvalume.
*Chicken wire will be draped over 6" vigas and will hang down and be connected into 8" vigas halfway through their diameter. The chicken wire will be earth plastered over from the interior (An extraordinary pain in the ass from what I 've read). This allows for sufficient space for insulation, hopefully sheep's wool.

I have, after much head-scratching (I think most people who know me would be astounded at the ocd-like behavior and concentration I am able to exhibit), come up with a roof design that it seems will function. There were a number of things to take into account: insulation, required roof slope for exposed fastener metal panel (between 2-12 and 2.67-12), sufficient roof height for the gutters to go into the 7' Thai jars I will build, cost of materials, and guesstimated structural stability.

Insulation: I opted not to use pumice. It doesn't have the highest r-value and it just became less appealing. I am looking for a cheap supplier of sheep wool fleeces which are apparently super-insulating and have no environmental negatives whatsoever. If I can't find a good source, either in New Mexico or Oregon, I would probably lean toward styrofoam because it's a waste material. There are a lot of options for insulation so I will see what pans out.

The roof heights got juggled a bunch. Metal roofs that have exposed fasteners--not standing seam which is significantly more expensive--have minimum roof pitches so that water seeping under the panels will not be an issue. That means I need at least four feet from ridge to the bottom of the roof. In reality, due to the Thai jars, that can't be below 8', so 12' it is for the ridge. In reality I need the center to be almost that high in order to allow sufficient courses above the doors so it works out fine. As a plus, the ceiling will be high enough to add a loft later on, if I so desire.

The cost also ends up quite reasonable as I am only using seven 8" diameter vigas. The 6" vigas are considerably cheaper, and come from smaller trees. 1x2 or 2x4 purlins can either be from scrap or purchased. They would be very inexpensive to buy. Because the earth bag walls, or a cob mix stuffed in small spaces, will go all the way up to the roof, I only need to insulate the internal square footage which saves money while allowing the roof to be larger and thus collect more precious water.

The design seems sturdy. Except for a couple pieces that will be cut to curve, it basically goes in the shape of a rectangle with an irregular (straight) edge so it seems simple too. Let's hope both of those things are true. Otherwise my first born child...

I am still trying to get information on two things. I have read about ceiling vapor barriers and their role in preventing condensation and heat loss. Also, I haven't been able to find out enough about roof vents and how I would design them if I do need them. Gutter alternatives are also up in the air. I want to gutter at the ends which would be necessary, simple and use very little material. I would like to have something along the sides, however, that would guide water down but make it unnecessary\ to gutter. Maybe I don't need to do anything. Maybe they sell something. Maybe I'll have to design something. Who knows. I have an overdue trip to Powells coming any day.
Posted by Aly b. at 9:16 PM