So, I've been quite bad about blogging. I find that whenever I'm actually doing things I don't have time to write about it, and when I do have time to write it means I'm not doing much and thus don't have much to write about. It took me a little bit of time to get back into the groove of things--finally, helping a couple friends on their projects helped me get started on my own. I worked pretty hard for a week, got my catchment set up and then left to visit family. It began raining right after I finished, so when I return I should have a happy amount of water waiting for me. I cannot even imagine how that will change my life. 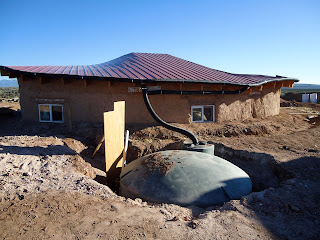 My roof presented a potential problem given the curve and inconsistent slopes. Luckily, I saw a book at some point that had a picture of a curved roof guttered with what appeared to be corrugated hdpe pipe, like what would be used in a french drain. I was never able to find more information about that particular set-up or any like it so had to go into uncharted waters without really any bearings to speak of.

And the slope...The roof has two major low spots and one more which I decided to regard as insignificant enough to ignore. If it's not, I'll deal with it when I have to. That basically means that I couldn't have just one downspout but had to have two. What I did was connect one of them (sloping) into the other so that there is only one that goes into the cistern. Look at the pictures above to see what I mean.

The cistern was the first thing I had to deal with. I had had a hole dug last year when I had a backhoe come out to dig the greywater basins, but my friend Kai let me know that it wouldn't work where it was. I had gotten it dug before I did the roof and so had not accounted for the funky slopes. So, I had the backhoe come out again because I didn't want to dig a four foot hole eight free across myself.

Once that was done, I still had to empty the cistern, which I mostly did with the help of my friend's sump pump which burned out when there were still 20 or 30 gallons left. Luckily, my friend Milla and I were able to dump it and roll it into the hole, cleverly lowering it with a rope.

The gutters were much easier than I anticipated. I took a 100 foot roll of 4" hdpe non-perforated corrugated pipe and cut off 60 feet of it. This 60 feet I slit with a circular saw so that I could slide it over the edge of the roof. I connected it with plumber's galvanized hanging tape. One screw went through the metal roofing into a 1x4 below with a roofing screw, and the other into the rafter tail. At first I did every other rafter, but then went back and did every one. It seems quite sturdy. Took me two hours.

Then we cut two holes at the low points just big enough to shove in the 4" pipe. This part was a little trickier but we got it in the end. We secured that piping with the same hanging tape, then used outdoor silicone to seal the joints. We ran the downspout into the small hole on the cistern lid, with some screen on it so rodents etc. won't get in, and voila! I also screened the ends of the gutters to discourage rodents from walking in, though they would still be able to get in if they really felt like it.

Once that was all done a huge burden left my shoulders but there was a bit more--connecting the cistern to the indoor plumbing. I had run the 1/2" PEX piping under the foundation in two places, planning on using the one on the west side of the house. However, with the new cistern placement, it made sense to use the one on the east side so I consulted some old photos, saw where it would be coming up and dug down to the boot covering it. We connected it with the shark bite connectors but couldn't connect it to the cistern water outlet because I didn't have the necesary wrenches. Thankfully, Kai came over with his pipe wrenches and got it all together so once I have my water pump and the solar to run it, I'll have indoor plumbing! Until then, I have water! Oh, what I can do with water!
Posted by Aly b. at 12:47 PM